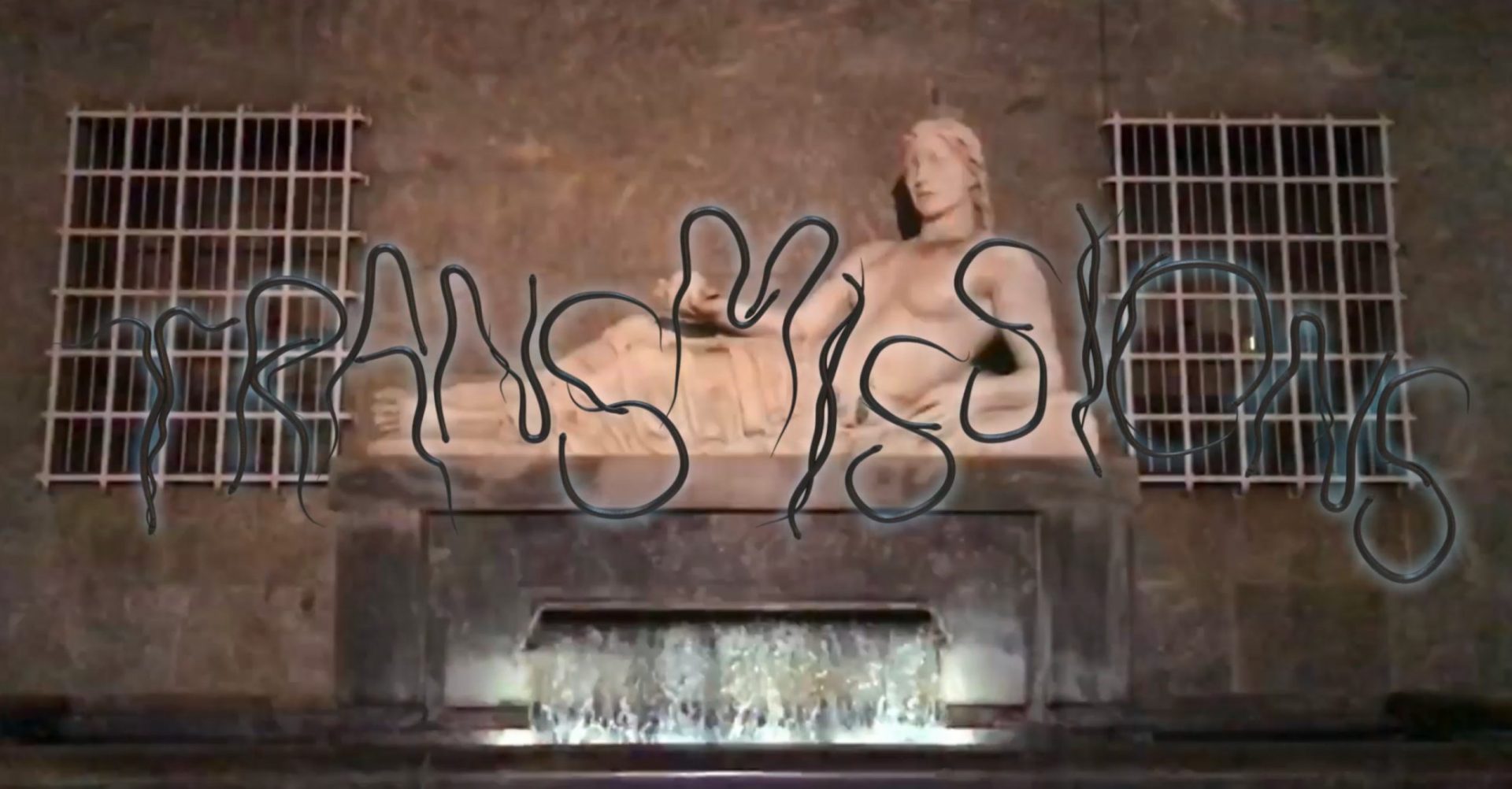 Our collective isolation highlights that all forms of community are now more important than ever, and it is vital that we find mechanisms to support each other through this precarious time. In the landscape that we have found ourselves, it is clear that many artists, writers and thinkers have had exhibitions, opportunities and subsequent fees cancelled for the foreseeable future. In response to this, we have established TRANSMISSIONS – an online platform that commissions artists to share their work within a classic DIY TV show format.

SOPHIE JUNG:
LEADEYES AND GENTLAMENT PLEASE PUT YOUR HANDS TOGETHER AND AND, 2020

Working across text, sculpture and performance, Sophie Jung’s work navigates the politics of re/er/re/presentation and challenges the reductive desire to conclude. Her texts unfocus on blurring scripted hegemonies and tap, hop, stammer and stumble over and across languaged powers. She employs humour, shame, the absurd, raw anger, rhythm and rhyme, slapstick, hardship, friendship and a constant stream of slippages. Her sculptural work consists of bodies made up of both found and haphazardly produced attributes and defines itself against the dogma of an Original Idea or a Universal Significance. Instead it stands as a network of abiding incompletion, an ever-changing choir of urgencies and pleasures, traumas and manifestations that communally relay between dominant and minor themes. Sophie Jung is invested in triggering a de-categorising of concepts and a deconceptualisation of categories and understands her approach to “stuff” – both legible utensil and metaphoric apparition – as an uncertain queering slash querying of historical materialism.

Sophie Jung (lives and works in Basel and London) received a BFA from the Rietveld Academy, Amsterdam, and a MFA from Goldsmiths, London. Recent projects and exhibitions include Sincerity Condition at Casino Luxembourg, Woman Standing at The National Gallery, Prague, Taxpayer’s Money for Frieze LIVE; Dramatis Personaea at JOAN, Los Angeles; The Bigger Sleep at Kunstmuseum Basel | Gegenwart and Block Universe, London; Come Fresh Hell or Fresh High Water at Blain Southern, London; Producing My Credentials at Kunstraum London and Paramount VS Tantamount at Kunsthalle Basel. She is currently working on solo exhibitions at E.A. Shared Space, Istituto Svizzero in Milan and Galerie Joseph Tang in Paris and works as a guest mentor at Institut Kunst, Basel.

Tom Cruise Studies is a meander of curiosity. There is no driving inquiry other than the question, “What’s, like, up with Tom Cruise?” Hedva considers the various roles Cruise has played onscreen and in public, from religious zealot, to cocky upstart, to a man oppressed by his own masculinity, to couch-jumping love-nut, to an exiled actor who clawed his way back into Hollywood via a maniacal obsession with doing death-certain stunts. Joined by two expert guests, Hedva and Vivian Ia will consider the astrology charts of Cruise and L. Ron Hubbard, while Matthew Miller will share his theory that the Mission Impossible franchise is Cruise’s vehicle for making public apologies to his ex-wife, Katie Holmes.

Johanna Hedva is a Korean-American writer, artist, musician, and astrologer, who was raised in Los Angeles by a family of witches, and now lives in LA and Berlin. Hedva is the author of the novel, On Hell. Their collection of poems, performances, and essays, Minerva the Miscarriage of the Brain, will be published in September 2020. Their essay, “Sick Woman Theory,” published in Mask in 2016, has been translated into six languages, and their writing has appeared in Triple Canopy, frieze, The White Review, and Asian American Literary Review. Their work has been shown at The Institute of Contemporary Arts in London, Performance Space New York, the LA Architecture and Design Museum, and the Museum of Contemporary Art on the Moon, as well as featured in parrhesiades. Their album, The Sun and the Moon, was released in March 2019, and they’re currently touring Black Moon Lilith in Pisces in the 4th House, a doom metal guitar and voice performance influenced by Korean shamanist ritual.

Vivian Ia lives in Berlin. Their poetry is Pushcart-nominated and has appeared or is forthcoming in Bone Bouquet, Tiny Seed, The Gravity of the Thing, Fourteen Hills, and Berkeley Poetry Review.

Matthew Miller is a video director from Sacramento, California. He works in both live-action and animation to create short films and commercial projects. In the last four years, he’s directed a series of short films for The Getty Museum with artists and authors such as Ellsworth Kelly, Yo-Yo Ma, Mary Beard, Mario Vargas Llosa, and Ed Ruscha. He is currently in quarantine with his wife and Snoopy-esque dog, Millie, in Hawaiian Gardens, California, where he has been dividing his time between starting a garden and collecting ideas for a film project.

CAConrad’s latest book JUPITER ALIGNMENT: (Soma)tic Poetry Rituals, is forthcoming from Ignota Books in 2020. The author of 9 books of poetry and essays, While Standing in Line for Death (Wave Books), won the 2018 Lambda Book Award. They also received a 2019 Creative Capital grant as well as a Pew Fellowship, the Believer Magazine Book Award, and the Gil Ott Book Award. They regularly teach at Columbia University in New York City, and Sandberg Art Institute in Amsterdam. Please view their books, essays, recordings, and the documentary The Book of Conrad (Delinquent Films) online at http://bit.ly/88CAConrad

“CAConrad’s poems invite the reader to become an agent in a joint act of recovery, to step outside of passivity and propriety and to become susceptible to the illogical and the mysterious.”
—Tracy K. Smith, New York Times.