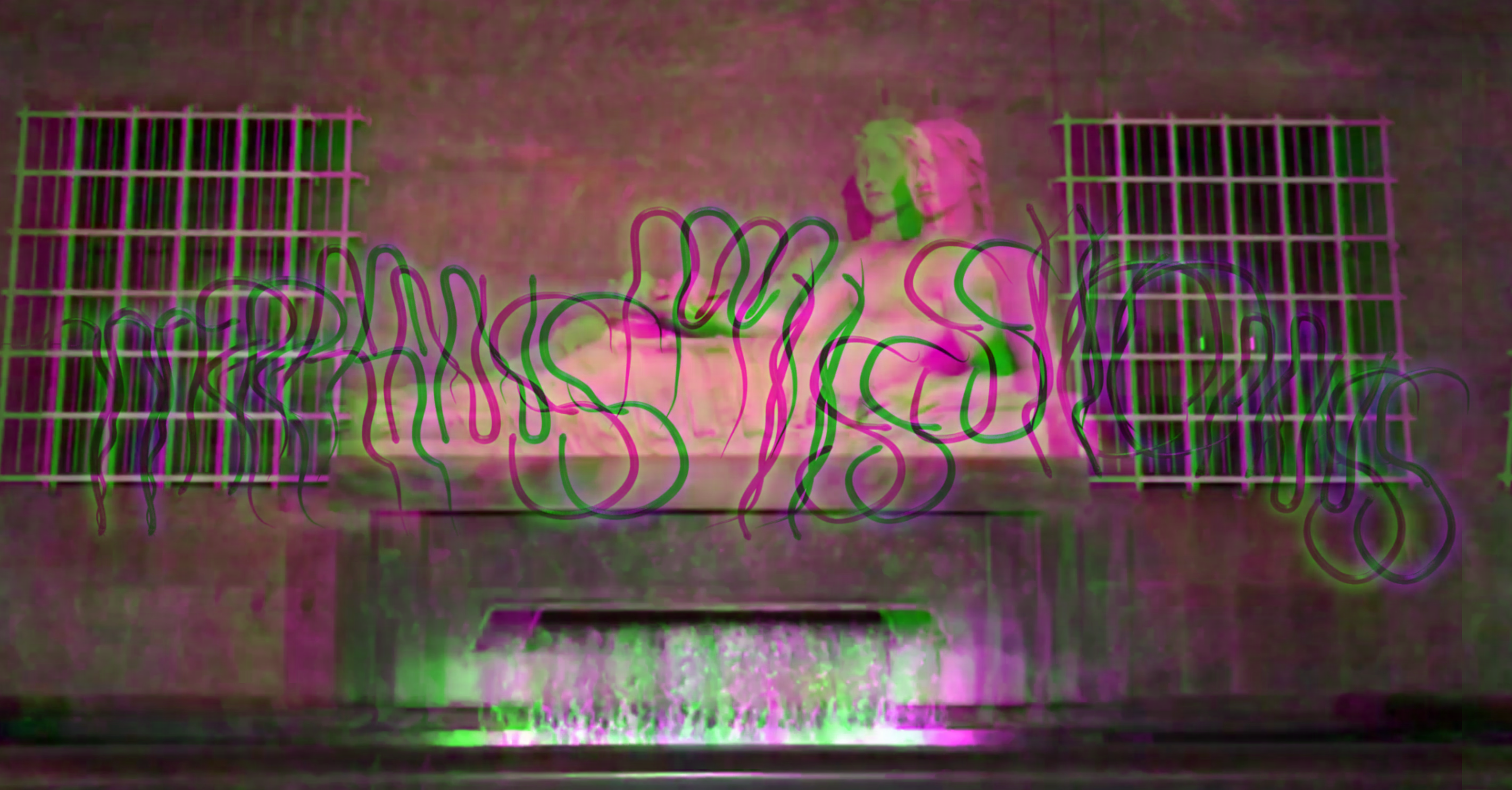 TRANSMISSIONS is back for Season 3!  In the past year we have learned that all forms of community are vital in providing mechanisms to support each other through this precarious time. In the continued pandemic landscape that we occupy many artists, writers and thinkers have had and continue to have exhibitions, opportunities and subsequent fees postponed or cancelled. In response to this,  TRANSMISSIONS 2020 was established as an online platform to commission artists to share their work within a classic DIY TV show format. Our new season for 2021 comprising 6 episodes will stream on a monthly basis via our website from March to October 2021.

"NOT A GIMMICK, A PUNCHLINE"

Not a gimmick, a punchline, examines the making of Reality TV. Why are we all obsessing over @tommiee_ from love and hip-hop? Why does the US military hire reality TV producers to analyze Air Force surveillance footage? Why is it called reality TV when it’s scripted? How do you create drama and intimacy in reality TV? What do Cardi B, Donald Trump and Kim Kardashian share in common besides being celebrities? What’s up with this new kind of catharsis?

CHRISTELLE OYIRI (b. Nogent-sur-Marne, 1992) is a multidisciplinary artist based in Paris: she is a sound artist and DJ as well as a performer. Her work highlights forgotten mythologies, the subtle interstices between memory and alienation, DIY culture and technology. Her work has been exhibited in France: from Lafayette Anticipations to Frac Lorraine (2019) and la Gaité Lyrique (2018), and internationally at Espace Arlaud (2018) in Lausanne, HEK Basel (2019) and Auto Italia South East (2019) in London.

If the variety show exhibits symptoms of social conditionings, can its participants distance themselves from the symptoms? How can a nation-state be seen as land when settler/post/decolonial critique’s applications are questionable? How do we speak about our own ethnicity when the doors behind us remain closed, and with walls around each of us? One participant’s provocation, “Does China really exist?” is brought into a dialogical structure that asks, “Can fear be cute?” Discussions around ethnicity are pumped into our air hammers and ghostly encounters are channeled across lifetimes, painted in smoke and fire.

Shen Xin (b. 1990, Chengdu) creates moving image installations and performances that empower alternative histories, relations, and potentials between individuals and nation-states. They seek to create affirmative spaces of belonging that embrace polyphonic narratives and identities. Shen Xin’s most recent work, Brine Lake (A New Body), will have its world premiere in Minds Rising, Spirits Tuning, Gwangju Biennale (2021), and its North American premiere in their first US museum solo exhibition at Walker Art Center (2021). Shen Xin has been a visiting artist at numerous institutions including, Slade School of Fine Art, Goldsmiths University London, University of Connecticut, and Newcastle University. They received the BALTIC Artists’ Award (2017) and held the Rijksakademie residency in Amsterdam (2018-19). Shen Xin practice on Miní Sóta Makhóčhe, the land of the Dakhóta Oyáte, as well as in London, UK

Dr. You Mi is a curator, researcher and lecturer at the Academy of Media Arts Cologne. Her long-term research and curatorial projects spin between the two extremes of the ancient and futuristic. She works with the Silk Road as a figuration for deep-time, deep-space nomadic imageries and old and new networks/technologies. Under this rubric, she has curated programs at Asian Culture Center in Gwangju, South Korea, Ulaanbaatar International Media Art Festival, Mongolia (2016), and with Binna Choi, she is co-steering a research/curatorial project “Unmapping Eurasia” (2018-2021). At the same time, her interests in politics around technology and futures led her to work on “actionable speculations”, articulated in the exhibition, workshops and sci-fi-a-thon “Sci-(no)-Fi” at the Academy of the Arts of the World, Cologne (2019), as well as in her function as chair of committee on Media Arts and Technology for the transnational political NGO Common Action Forum. She is one of the curators of the 13thShanghai Biennale (2020-2021).

Her academic interests are in media theory and performance philosophy, science and technology studies, as well as new and historical materialism. She is fellow of Alexander von Humboldt Foundation (Germany), member of the Academy of Arts of the World(Cologne), and serves as director of Arthub (Shanghai) and advisor to Institute for Provocation(Beijing).

Born and raised in Changchun, China, Wang Tuo currently lives and works in Beijing. Through his performative manipulation and intervention in intellectual legacies such as literature and historical narrative, Wang Tuo employs mediums of film, painting and performance to examine the unreliable relationship between the contemporary human status, myth and cultural archive. Wang’s practice also seeks to develop a discourse on how present ideology is derived from its historical context continues to adapt to changing condition.

Wang Tuo was an Artist in Residence at the Queens Museum, New York from 2015 to 2017. He won the China Top Shorts Award and the Outstanding Art Exploration Award for Chinese Short Films in Beijing International Short Film Festival 2018. Wang Tuo is the winner of the Three Shadows Photography Award 2018 and the Youth Contemporary Art Wuzhen Award 2019. He was awarded a research residency at KADIST San Francisco 2020. In 2021, Wang Tuo will have his first institutional survey at UCCA Beijing.

Zairong Xiang is Assistant Professor of Comparative Literature and Associate Director of Art of Duke Kunshan University. He is author of Queer Ancient Way: A Decolonial Exploration (punctum books, 2018). He was chief curator of the “minor cosmopolitan weekend” at the HKW Haus der Kulturen der Welt (2018), and editor of its catalogue minor cosmopolitan: Thinking Art, Politics and the Universe Together Otherwise (Diaphanes 2020). As a member of the Hyperimage Group, he has co-curated the 2021 Guangzhou Image Triennial. He is working on two projects, respectively dealing with the concepts of “transdualism” and “counterfeit” in the Global South especially Latin America and China. He was Fellow at the ICI-Berlin Institute for Cultural Inquiry (2014 – 2016) and postdoctoral fellow of the DFG Research Training Group minor cosmopolitanisms at Potsdam University (2016-2020). All his writings can be read here: www.xiangzairong.com

Are you still looking for love? Are you between the years 2000 and 2021? Are you ready for the algorithm to shape your desire? not/nowhere presents Pratibha Parmar’s Wavelengths (2000) alongside research by Jennifer Martin.

not/nowhere (n/n) is an artists’ workers cooperative. Black and POC-led and East-London based, we provide training in skills and techniques for film, audio, performance and writing. Our mission is to ensure that local artists who use new media in their work can access film and media equipment, and acquire the training to use these machines creatively. We are committed to Black and POC artists exploring new possibilities for owning the means of production of our work and finding sustainability in our practice. not/nowhere’s additional focus is to provide infrastructural support for artists working in all mediums, and enfranchise people living or working in London to take pleasure in expressing themselves creatively.

Jennifer Martin is an artist filmmaker, and writer based in London. Her work and research explore the performativity of belonging and instability of images; these interests manifest in a mix of narrative and experimental pieces. Martin has exhibited and screened work in the UK and abroad with recent solo exhibitions and commissions at Primary (Nottingham), Turf Projects (London), and Cypher BILLBOARDS (London).

Writer | Director | Producer Pratibha Parmar has directed numerous award-winning films for BBC, Channel 4, ITVS, PBS and European broadcaster. Her work has also had theatrical distribution. Her credits include ALICE WALKER: BEAUTY IN TRUTH, a feature length documentary on the life of Pulitzer Prize winning author of THE COLOR PURPLE and includes interviews with Steven Spielberg, Danny Glover and Quincy Jones. Recognized as a pioneering filmmaker, Pratibha directed the ground breaking film KHUSH, one of the first films to give visibility to and highlight the experiences of LGBT people in India. Pratibha made her debut as a narrative director with her award-winning romantic comedy, NINA’S HEAVENLY DELIGHTS.

In 2019 Pratibha made her US debut as a director of scripted television when she was invited by Ava DuVernay to direct episode 12 of Season 4 of QUEEN SUGAR, executive produced by Ava DuVernay & Oprah Winfrey for OWN/Warner Brothers.In 2020, Pratibha was selected as part of NBC’s pioneering Female Forward project, designed to promote female directors in the world of scripted television drama.

A globally recognised filmmaker and human rights activist Pratibha’s films, WARRIOR MARKS and KHUSH helped gain much needed rights for women and girls as well as contributing to the visibility of marginalized LGBT communities. Her accomplishments have been recognized with multiple awards. In 2017 Pratibha received the ICON award presented by Bagari London Indian Film Festival in Association with the British Film Institute for Outstanding Contribution to Indian and World Cinema. In 2016 Pratibha was included in the BBC’s list of 100 inspirational and influential women. Pratibha is the proud recipient of the Frameline Film Festival Award, presented to an individual who has made a significant and outstanding contribution to lesbian and gay media.

Pratibha Parmar was invited to be a Visiting Artist at Stanford University and has also taught film in her capacity as a Professor in the Film Program at California College of the Arts, San Francisco. She is a member of the Directors Guild of America and a member of Academy of Motion Picture Arts & Sciences.

SEASON 3 of TRANSMISSIONS will run as six episodes screening once per month on Wednesday at 9pm GMT/BST on Transmissions TV. Each artist included in TRANSMISSIONS is paid a fee in return for their contribution. In some instances, artists have waived their fee in order to donate to a charity of their choice. With a sense of community, all the money used to pay artists in Season Three has been kindly donated by established institutions and commercially stable artists.